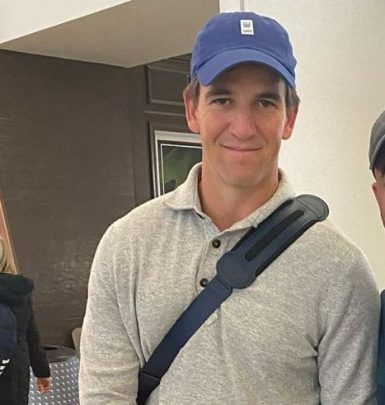 Abby McGrew is most famed for being a spouse of NFL star Eli Manning. She was born in Nashville, Tennessee, in a household of Tom McGrew, an author of Fairy Magic book, and homemaker Susan McGrew. She has sisters Molly and Lacey. However, the most prominent person in their family was Abby’s paternal grandfather – Thomas Neely McGrew (1918-2009). He was a World War II veteran and a banker who also served as a mayor of Columbia in 1958-1962.

McGrew is a well-educated lady. She studied at Brentwood Academy plus earned a degree in family and consumer sciences at University of Mississippi. After moving to New York, she got interested in fashion and worked as an account executive for designer Pamella Roland.

Abby McGrew and Eli Manning got acquainted in 2002, when they were both students of University of Mississippi. In 2007, the athlete popped the question and espoused his sweetheart at a low-key ceremony in Cabo, Mexico, on April 19, 2008. In 2011, their eldest daughter Ava drew her first breath. She was followed by two sisters, Lucy and Caroline, in 2013 and 2015. In 2019, Abby gave birth to a baby boy named Charlie.

Abby and Eli are very warm-hearted people who regularly donate money to various charities. For instance, they created Eli & Abby Manning Birthing Center at St. Vincent’s Hospital in Greenwich Village, Manhattan. By the way, while supporting her husband at his games, McGrew preferred to sit at cheap seats in the stands instead of suites.

A curious fact: at the couple’s nuptials, Abby’s sisters were her bridesmaids while Eli’s brothers, Peyton and Cooper, were his groomsmen.