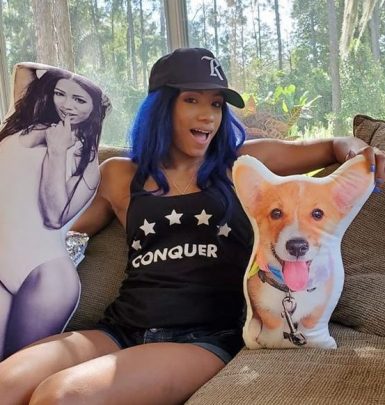 Sarath Ton is a former wrestler known as Kid Mikaze, Mr. Castle and Rutherford Hayes. Today, he makes costumes for WWE and is also famed for being a spouse of Sasha Banks.

Sarath Ton got acquainted with Sasha Banks in 2010 but they became a couple only in a year. In 2012, he popped the question and waited till August 4, 2016, to espouse his sweetheart. The newlyweds didn’t reveal their marital status till 2017. Banks told that the reason for such conspiracy was that fans sent her husband hate on social media and she didn’t want to provoke them.

Sarath and Sasha seem to be madly in love. They support each other and are the best friends. Moreover, Ton tells that his spouse inspires him to be a better human. The lovebirds love to have rap battles and spend time with their Corgi named Ryu Maivia. By the way, Sarath designs all Sasha’s ring costumes.

And a couple of words about other members of Sarath’s family must be added. His father Saroeun is a senior production group leader at Friendly’s restaurant in Springfield, Massachusetts, where his mother Mul also works. Ton also has two brothers: Saren, a principal manufacturing engineering tech at EMC, and Sarann, a lead ED tech specialist at Baystate Medical Center.

A curious fact: in 2012, Sarath competed against his future wife during a fatal 4 way intergender match for Beyond Wrestling.